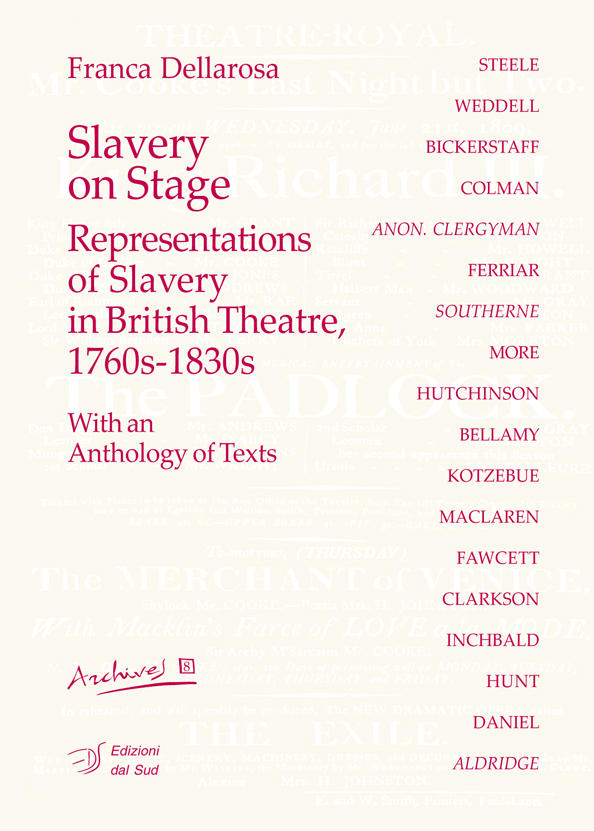 This book explores some aspects of British theatrical culture related to the emergence of the transatlantic slave trade, and slavery as a built-in institutionalised practice in the colonial system, as topical issues in public debate. As both a critical study and an anthology, its aim is multiple. Part I reconstructs some defining traits of the theatrical construction of the black ‘slave-servant’, privileging the track of the comic/sentimental handling, that appears as an established mode on the late eighteenth-century stage, with the musical component playing an increasingly important role. The genre-oriented critical investigation in Part I is paralleled by the aim of documenting the impact of the political and ideological issues at stake on theatrical discourse – and vice versa – as emerging in a variety of sources. The anthology of texts that forms Part II includes the annotated full texts of key plays, such as Isaac Bickerstaff’s The Padlock, George Colman the Younger’s Inkle and Yarico and John Fawcett’s Obi pantomime wordbook. It also includes a selection of previously uncollected shorter texts, excerpts taken from a range of sources, variously linked to the theatre. The relevance of music in the theatrical culture of the age, and specifically, its role in the plays focused on the slavery issue, have prompted a project of collaboration with Angela Annese, of the Conservatorio di Bari “Niccolò Piccinni”, which has resulted in the production of the CD that is integral to the book, providing a sample of the music by Charles Dibdin and Samuel Arnold that accompanied performance of the three plays in question.

0 Replies to “Slavery on stage – Representations of Slavery in British Theatre, 1760s-1830s”